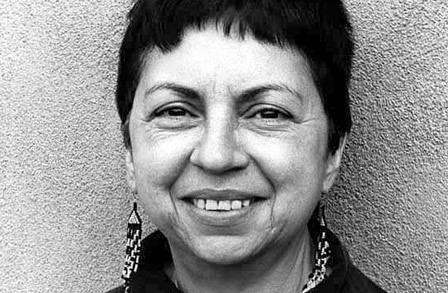 I also read a speech that I will include in this post as well. Please share this video with everyone you know.

Before taking my first Latinx Literature class and being exposed to great female authors like Gloria Anzaldua, I felt a disconnect from my culture. I didn’t know that much about the history or current events from the country my family came from.

Many of my ancestors were political activists, so I’ve always grown up around strong, independent women. I love the way in which Gloria Anzaldua writes about abstract concepts so unapologetically; especially during a time when it wasn’t safe to do so.

The Voice of the Marginalized

She was brave enough to give a voice to the marginalized, and I admire the strength in her work. I have a personal connection to Anzaldua’s Borderlands/La Frontera and her concept of mestiza consciousness. Anzaldua describes mestiza consciousness as “a consciousness of duality.” I am a mixture of many different beautiful cultures. Some of those cultures were pitted against each other for many centuries before me.

Considering how long ago Borderlands was published, I expected her to work to be a lot more mainstream. I thought I would find a plethora of information about her. While there was some information about her, it wasn’t enough for me; I wanted to know more about this incredible woman. I was upset with myself for not knowing who she was before reading her work in college.

Frustrated, I was even more upset with the Texas Educational System for never mentioning any Latinx authors even once. The one thing I regret the most about not being able to read her work sooner is that when I finally did read it, so much of my confusion regarding my cultural identity finally made sense. Her concept of nepatla, or “in-between-ness” was a tangible concept that I could understand. It helped define an identity that I had never claimed before.

When creating this biopic, I wanted to focus on the things that most people may not know about Gloria Anzaldua; like information about her childhood and her education. From the time I first read her work to the time that I created this biopic, I have noticed a considerable difference in the amount of awareness of her image and work. When I went to The Latino List photography exhibit at the San Antonio Art Museum, I found a sticker set with pictures and quotes from Anzaldua for $15.

While I was happy to see Anzaldua and her image in a mainstream environment, it walks a fine line approaching the dangers of commercialization. Anzaldua’s image and quotes have been used on websites like Etsy, and promote Anzalduan ideas and concepts. Her image has inspired countless paintings. This is interesting because I could barely find more than a handful of pictures of her and none of her family.

She has become not just a Chicana icon, but she has become an icon for the marginalized and voiceless. In reading her work, her courage has inspired many people to embrace the freedom to be yourself in order to really figure the many facets of their identity even if it doesn’t exist yet.

She has created an abstract language so that people can learn to understand themselves and others regardless of time, space, and geographical borders. I hope that with this video that I can let the world know about Gloria Anzaldua’s extraordinary life journey. She created a path for many of us to follow her in her footsteps. We must all do our part to continue to break down barriers; to keep pushing the boundaries of what is socially acceptable.

You should also check out my blog discussing my experience being in a play called The Panza Monologues. The play was written by another favorite Latina author Virginia Grise.