In this post, I will keep you up to date on all the amazing accomplishments I have achieved since becoming a published author.

I started writing a book in 2008, the same year I started my website.

I was 15 years old, and I decided I was going to graduate high school in the following school year.

On June 5th, 2011, I published my book Sad Songs and Gray Dresses as an eBook. I was 18 years old and had no idea how to market my book. My original book cover sucked, but it was the best I could do with the skills I had at the time. I was a sophomore in college when I became a published author.

For some reason, I decided not to tell anyone about it. I guess I figured that having lots of social media followers would be enough. In hindsight, I’m glad that no one bought my first edition.

It made me realized I needed to try harder.

In 2015, I published the second edition of my book with a brand new cover and minor editing. I still did not sell a single copy. This year was the year that I realized that word of mouth was a much better strategy than online advertising. Networking was the best thing I could have done. Despite the lack of sales, I didn’t give up. I knew it was my dream to be a successful writer. 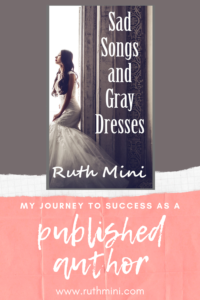 I knew I just had to keep trying.

In 2017, I re-released the third edition of my book and sold two copies. I was excited, but I knew I had to keep up the momentum. I didn’t sell very many copies after that. People that had known me my whole life still had no idea that I was a published author. I’m not surprised they had no idea considering I had only written one book eight years ago, and never published again.

During this time, I had just started the Ruth Mini Mobile Library because I was unemployed. Theoretically, I could have started writing again during that time. The reason I didn’t was that I wasn’t in the right mindset for that.

Writing for me is mostly sitting in a room for hours.

I like having a quiet place where I can be alone. However, I needed to get out of the house. More than anything I wanted to start actively writing again, but I had to start preparing for graduate school. It’s tough balancing your passion with your career.

I missed writing so badly, and I knew I needed to find time for it. That wouldn’t happen just yet.

In 2019, I finally rekindled my love of writing. A friend of mine suggested that I turn my book into a print version. I had always hesitated for a variety of reasons, but I think of a majority of it was that I was scared. For whatever reason, that friend spoke to me in a way that convinced to get my book printed.

2019 was the year I realized I didn’t necessarily need to try harder. I just needed to let the world know that I was an author. 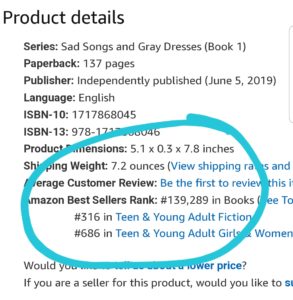 Since making my book available as a print version, I sold more than 20 copies in 2 months. It may not seem like much, but I am very proud of that after not having sold any for many years. I feel so much more proud of being a published author. Now I tell everyone that I have a book available to purchase.

Coincidentally, I published the print version of my book Sad Songs and Gray Dresses (Print Version) on June 5, 2019; exactly eight years to the day I published the first time.

One of my first author goals was to surpass triple digits in sales. As of July 2019, I have accomplished that goal. My next goal is to reach the Top 100 on Teen and Young Adult Fiction on Amazon. So far the closest I have made it to the top is #139, 289.

I saw my book on a website for a bookstore in New Jersey. How cool is that?! 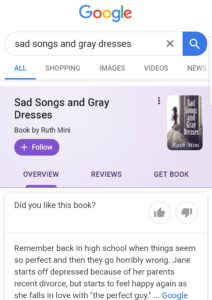 I would highly recommend adding your book to this website. The idea that someone can order my book to be picked up at a local bookstore is a strange accomplishment. Online book sales have certainly changed the future of bookstores and how they function in a community.

I was super excited when I saw it while searching for my book online. It basically it means I’m famous and important, so says our Google overlords.

I started writing the sequel to this book in May of 2019. Just like the first book, I wrote this book in the span of two months. It was finished before the launch of the print version of my first book. I made plans to release my second book in April 2020.

Then the pandemic happened.

I was devasted that my book launch had to be cancelled. Instead of releasing it anyway, I put the story through a few more rounds of edits. I ended up pushing the launch back to August 2020, but it was the best decision I ever made.

I cut at least 12 pages from the book, and I am so much happier with the story. Unfortunately, I only sold 12 copies of this book to date. I blame the pandemic for that. Many indie authors say their sales have slowed, so I know I am not alone.

I do not pay for ads for my books because I’ve always heard that you should wait until you have 3 books out. I’m proud of the 80 books I’ve sold using only social media, SEO, and with my second book, I saw online retailers take notice of my work. I found my book available on websites for Barnes and Noble, Walmart, and Half Price Books. It may not be available in stores, but you can purchase my book with a gift card to those stores.

Okay, it’s not technically a trilogy because I have more books planned for this series. I wrote the third book of the Sad Songs series during 2021. I tried to finish editing by the end of the year, but instead I graduated with my master’s degree in Fall 2021. That did cause a significant delay in the editing process. However, much like the pandemic affected my second book, I know that spending more time than anticipated on a project can be a good thing.

The third book is titled Sad Songs and Indie Films. Bookmark this post to follow my journey as it happens.

I currently have two books in the works for 2022, and I can’t wait for you to read them all!