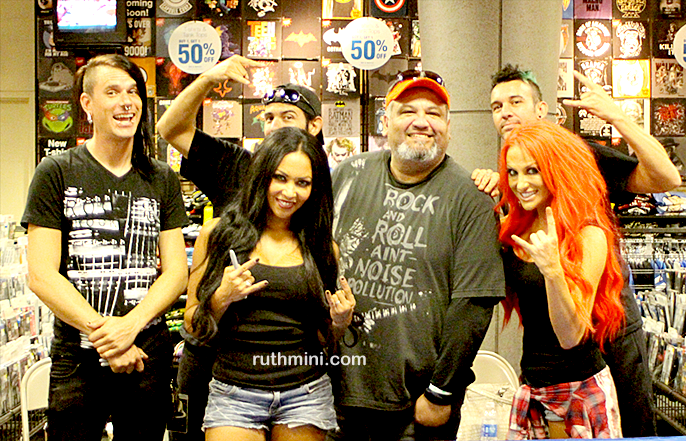 I attended the Meet and Greet for the Butcher Babies at F.Y.E in San Antonio, Texas, before heading to the show later that night. My dad gave them some of his customized guitar picks, and the band loved them. They signed his CD, and the band was super nice. You can tell that they genuinely love their fans because of the way they were interacting with everyone. You could tell they wanted to stay longer, but they needed to get ready for the show.

“I love the Butcher Babies because they represent female empowerment. If you want to be a lead singer in a metal band, do it. There’s nothing you can’t do.”

This day was a long time coming, and we waited in line for 30 minutes just to spend one minute with them. Even though there was a long line, it was well worth it to meet the band because not many bands would go to the mall and take pictures and autograph stuff for their fans. The band was chill and down to earth. They don’t act famous or anything. They are just regular people. I wish I could dye my hair like Heidi and Carla do. They always look so awesome on stage.

My dad had a blast at both the meet and greet and at the concert. Lately, he has had to tone it down a little bit because of his health. That won’t ever stop him from enjoying a good show. I even bought my dad a ton of merchandise from the Butcher Babies for his birthday because he loves them so much. I would highly recommend their albums, especially their cover album. They have good sound and always put on a great show.

I was lucky enough to film the encounter since it was such a short period.

If the link doesn’t work, please click here to view the video.